Posted on September 24, 2014 by doorsopendays

Benjamin Tindall Architects are opening their office to the public as part of the annual Doors Open Day  this Saturday. Here’s some background information on their building and its site:

Built on part of the City Wall, their building on Victoria Terrace has seen re-use over four centuries as a tannery, an Institute for the Relief of Incurables, sweet manufacturing, a bomb shelter and a copper etching works. Victoria Terrace was built c.1845, and it and the building follows the line of the old city wall, the Murus Castri, which itself dates from 1426. 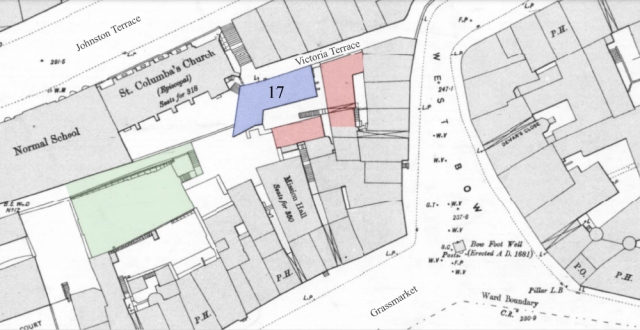 BTA invite visitors to come and learn about the history of the building and surrounding area, admire the unusual views across the City’s Southside, including Heriot’s, Greyfriars and Arthur’s Seat and see work of the Practice.

Benjamin Tindall Architects is a practice with varied work including  Masterplanning new settlements, Conservation Plans, new buildings, interventions, repairs and exhibitions to furniture design, and a portfolio including several local historic buildings along the Royal Mile that are open on Doors Open Days. They are known for their appreciation of the Art and Craft of architecture and sensitive approach.

Benjamin Tindall Architects are opening their office at 17 Victoria Terrace, Edinburgh, to the public as part of the annual Doors Open Day event on Saturday 27th September between 11am – 4pm.

A tour through the building, via their courtyard garden, will emerge in the West Bow.

Doors Open Days is Scotland’s largest free annual architectural event. It is coordinated nationally by the Scottish Civic Trust.
View all posts by doorsopendays →
This entry was posted in Uncategorized. Bookmark the permalink.